On January 13th we celebrate the feast day of Saint Hilary patron saint of Parma (one of its patron saint, actually).

Hilary was born in Poitiers in the early 5th century in a pagan family. He was learned and after studying the Old and New Testament he chose to become a Christian when he was already in his thirties. He was so esteemed that he was elected bishop of his own city. His writings opposing fiercely the Arian heresy earned him the title of Doctor of the Church, but he also spent some years in exile in Phrygia (present day Turkey). 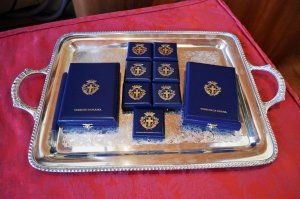 So how did he come to be associated with Parma? According to tradition he came to Parma on a winter day on his way back from exile. He was so poorly shod that a kind-hearted cobbler gave him the gift of a new pair of shoes. On the next day the man found a pair of shining new shoes made of gold in place of the shoes he had charitably given to the saint.

This story about generosity being rewarded highlights the warm-hearted attitude of Parmesans to others and it has inspired the modern tradition of Premio Sant’Ilario a ceremony during which the Mayor of Parma honours to citizens, local associations or societies who have contributed most to the welfare of the community.

You can see different representations of Saint Hilary patron saint of Parma in town. His bishop’s vestments always characterize him but there are variations, the most noticeable one being his age. 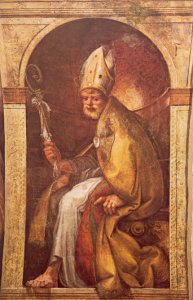 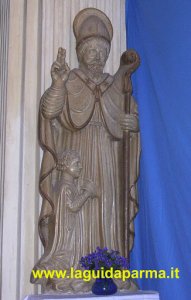 An early fifteenth century statue in Saint Hilary’s oratory in Oltretorrente represents him as a mature, bearded man in a gesture of blessing with a man kneeling at his feet, while Parmigianino in the Benedictine church of Saint John the Evangelist represents him as a benevolent (barefooted) old man looking kindly at us. 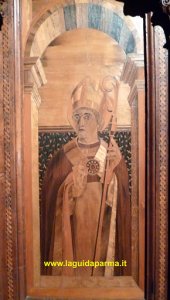 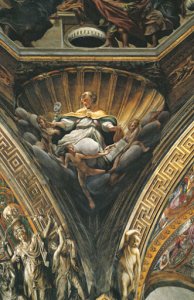 In the late fifteenth century inlaid stalls of the choir on display in Galleria Nazionale he is a serious young man wearing mitre, chasuble and gloves and holding a crosier. Correggio, too, portrays him as a young man, but in the fresco in one of the squinches of the dome in Parma Cathedral the style is more informal and the saint is bare-headed and smiling sweetly while angels surrounding him are carrying his crosier and his writings (and we can see his right shoe! I wonder if it is made in Parma …).

As it often happens in Parma, a specific recipe is associated to this festival. Scarpette di Sant’Ilario, cookies in the shape of shoes are baked for Saint Hilary’s day. The recipe is simple: the main ingredients are flour; eggs, butter and sugar, but the shape and the decorations make them special.

Oratorio di Sant’Ilario is rarely open so better check out opening times on the official tourist information site. The locations of the works of art mentioned above are part of the tours in the section Parma, a little capital.
Laura Cova2020-03-03T12:51:22+01:00