Hidden inside Rocca Sanvitale (Sanvitale castle) in Fontanellato near Parma there’s a small room frescoed by a Renaissance master. In 1524 Count Galeazzo Sanvitale commissioned the twenty-year-old Francesco Mazzola, aka Parmigianino, to paint the myth of Diana and Actaeon and the result is absolutely charming.

A talented young painter and a learned count 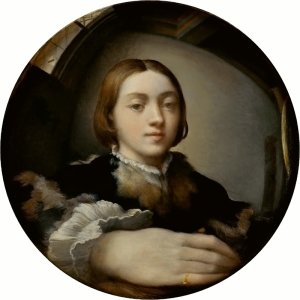 Although he was young, Parmigianino was very talented and he had already proved his worth by working for the most influential Benedictine Monastery in Parma: San Giovanni Evangelista.

While in Fontanellato Parmigianino also portrayed his patron Galeazzo Sanvitale as a wealthy, fashionable knight. His own “Self-portrait in a Convex Mirror” dates back to this time and it is an amazing work meant to show off his prowess as a painter (it was donated to Pope Clement VII who was duly impressed). 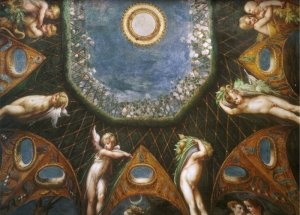 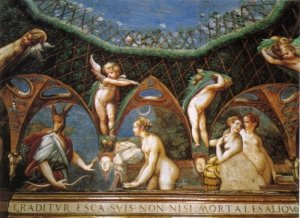 In Fontanellato Parmigianino frescoed a small vaulted room on the ground floor of the castle, probably a private room, maybe a study-room or a bathroom.

In the ceiling a trellis with white roses and putti opens onto a bue sky with a circular mirror in the middle surrounded by the Latin words “Respice finem” (Consider the outcome).

The sorrowful tale of the young hunter punished because he accidentally sees Diana bathing naked unfolds along the upper part of the walls of the small room. Actaeon is turned into a stag and killed by his hunting dogs but violence is only hinted at in Parmigianino’s frescoes which are characterised by refined elegance and grace even in the smallest details.

The haunting beauty of the frescoes is enhanced by its mysterious meaning. Critics have pondered over its meaning in connection with what we know about the Sanvitale family at the time, but the correct interpretation of the story is still elusive.

And the castle has more to offer … 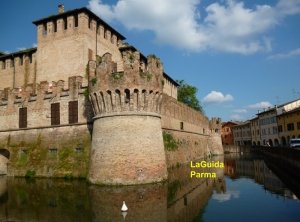 The ancient castle is in the centre of Fontanellato. It was built in the 15th century as a fortress with a crenellated curtain wall and four corner towers and it is still surrounded by a moat where carps swim peacefully. Generations of Sanvitale embellished and changed its outward and inward aspect until the last Count – Giovanni Sanvitale – sold it to the municipality in 1948.

Many rooms on the first floor and some on the ground floor can be visited where art, furniture and weapons related to the century-long history of the castle are on display.

The castle walls also enclose a small garden where an optical wonder was set up in the 19th century for the enjoyment of the family and their guests. In the tower which was once a prison a system of lenses and mirrors allows you to see what is happening in the main square foreshadowing our technological CCTV systems. 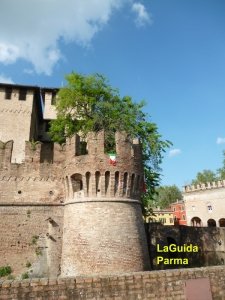 Fontanellato lies in the Po plain, 19 km. north of Parma. The Sanvitale family is only one of the feudal families that owned the manors and fortresses still dotting the plain and hills of our region. You can find out about them on the Castelli del Ducato webpage and in the section Discover Emilia of this site.
Laura Cova2020-03-03T12:51:22+01:00