On a tour to Parma with Charles Dickens

Can you imagine coming on a tour to Parma with one of the best-known British writers of all times? Indeed Charles Dickens visited our city in 1844 and recorded his impressions about it in a travelogue which was later published with the title Pictures from Italy. He was travelling through Italy and France to take a break from his hectic activity as an author, but writing was so essential to him, that he vividly recorded his experience “to compare impressions with some among the multitudes who will hereafter visit the scenes described with interest and delight” as he wrote in the preface to the book. So whether you have already visited the city or are planning to come on a tour to Parma, read on! 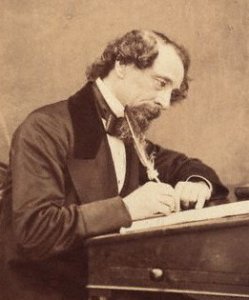 Dickens writing at his desk 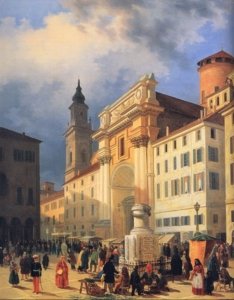 On a sunny November day Dickens finds “… Parma has cheerful, stirring streets … Always excepting the retired Piazza, where the Cathedral, Baptistery, and Campanile – ancient buildings, of a sombre brown, embellished with innumerable grotesque monsters and dreamy-looking creatures carved in marble and red stone – are clustered in a noble and magnificent repose. Their silent presence was only invaded, when I saw them, by the twittering of the many birds that were flying in and out of the crevices in the stones and little nooks in the architecture, where they had made their nests”. Our Piazza Duomo has not changed much since … 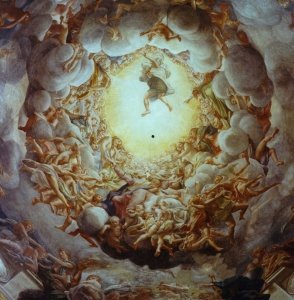 Inside the Cathedral, he indulges in an unconventionally humorous description of the cupola frescoed by Correggio: “Connoisseurs fall into raptures with

[the frescoes in the cupola] now; but such a labyrinth of arms and legs: such heaps of foreshortened limbs, entangled and involved and jumbled together: no operative surgeon, gone mad, could imagine in his wildest delirium”. Not exactly the opinion of a scholar, although some tourists – at a superficial glance – might be inclined to share it! 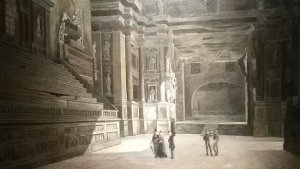 His last stop is the Farnese wooden theatre inside the Pilotta Palace, built in 1618 and rarely used since. In fact this is what Dickens sees: “a grand, old, gloomy theatre, mouldering away. It is a large wooden structure, of the horse-shoe shape … Such desolation as has fallen on this theatre, … none but worms can be familiar with. A hundred and ten years have passed, since any play was acted here. The sky shines in through the gashes in the roof; the boxes are dropping down, wasting away, and only tenanted by rats; damp and mildew smear the faded colours, and make spectral maps upon the panels; lean rags are dangling down where there were gay festoons on the Proscenium … The desolation and decay impress themselves on all the senses. … If ever Ghosts act plays, they act them on this ghostly stage”.
The description reminds us of Miss Havisham’s room in Great Expectations, but luckily the theatre has come to a new life since then. It has been fully restored and now it is one of the most impressive sights in Parma where concerts and operas are still occasionally staged.

[Quotations from the preface and chapter 5 of Pictures of Italy]. If you would like to walk in Dickens’s footsteps, come on a tour to Parma with us and choose your itinerary in the section Parma, a little capital of our site.
Laura Cova2020-03-03T12:51:09+01:00