In the early 16th century the Benedictine monastery of the nuns of Saint Paul was one of the wealthiest and most influential religious institutions in Parma. The nuns of the monastery were the daughters of the local ruling families and the abbesses could afford to hire the best contemporary artists. So around 1520 the abbess Giovanna da Piacenza commissioned the young Correggio to fresco one of the rooms of her private apartment inside the monastery itself. Soon after Giovanna’s death enclosure was enforced in San Paolo (nuns were no longer allowed outside contacts) and only in the 19th century when the monastery was suppressed, Correggio’s fresco was revealed to the public and made accessible. 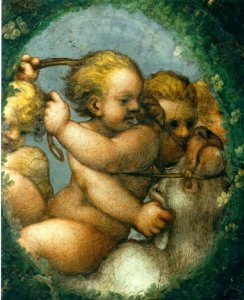 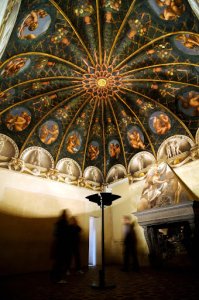 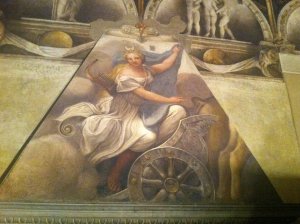 Out of a vaulted ceiling Correggio creates an arbor: the ribs in the vault become rushes bound together by pink silk ribbons while oval openings reveal lively children playing with hunting equipment. On the fireplace the goddess Diana on her chariot seems to be showing the way. 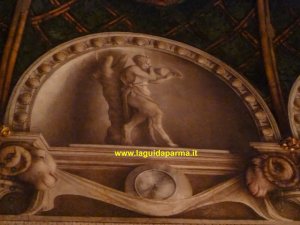 Below the foliage there are painted lunettes with fictive marble sculptures of classical figures evoking pagan antiquity: the Fates, Pan, Juno, the Graces … 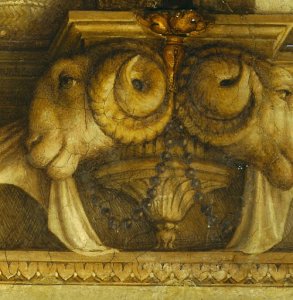 With one last masterly touch Correggio painted a cornice with capitals decorated by pairs of smiling rams’ heads. A linen cloth stretched between the rams holds bowls and jugs and Correggio delights in depicting the weight and shine of metal and the gauziness of fabric.

This charming room is still an enigma for scholars who do not agree on the global meaning of the frescoes which are rather unusual for a monastery. No doubt the personality of the abbess Giovanna plays a central role: her family coat of arms with three crescents which is in the keystone of the vault and on the door header ecoes the crescent moon on Diana’s head clearly linking the virgin goddess to the nun.

Maybe the rams with their worldly-wise, amused smiles are the only ones to know the answer to the riddle!

Camera di San Paolo is a state museum. It is usually closed on Mondays and entry is free on the first Sunday of each month. Check out opening times.
A full day tour will allow you to admire all the works of Correggio in Parma.
Laura Cova2020-03-03T12:51:23+01:00